The Story Of Sultana 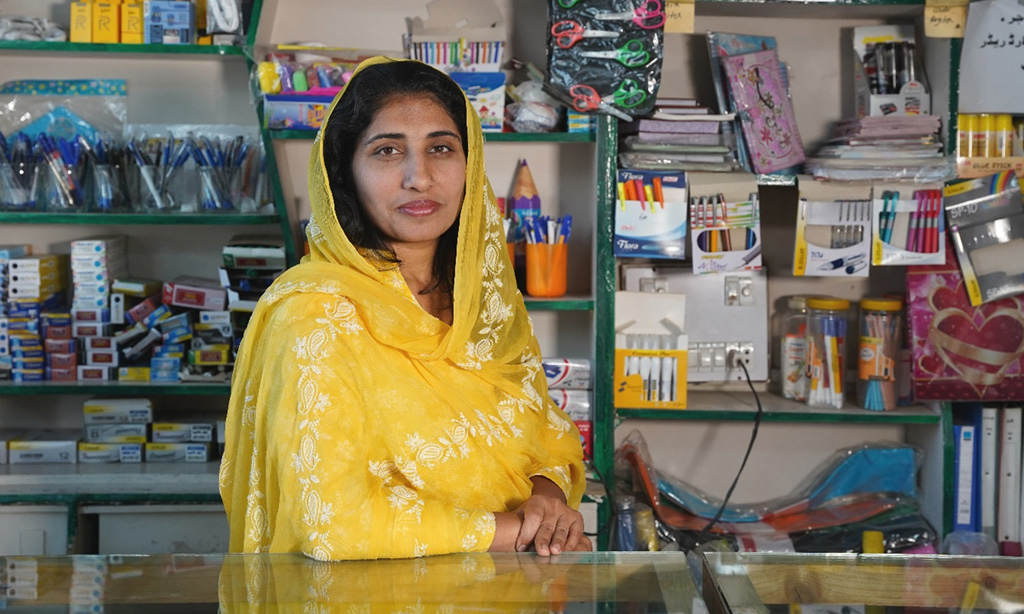 The famed University Road in Sargodha, Pakistan is where the city’s major commercial activity happens. It’s a location where any local business would spend anything to make their presence known. Being the city’s go-to place for everything ranging from car repairs to furniture to grocery shopping, the place attracts scores of people every day.

Sitting quietly amongst other bustling businesses on this busy road is an unassuming building that houses a small-scale establishment. Unlike the other shops and stores in the vicinity, this particular one exemplifies true woman power and resilience. This is the place that has turned Sultana Aslam into a successful businesswoman in her own right.

From humble beginnings and everyday challenges, Sultana became stronger. “When you have hit rock bottom in your life, the only way left to go is up, and that’s exactly what my resolve was,” shares Sultana, who is lovingly called Faiza by her family and friends. That’s also the name she has picked for her business.

Like any small-town girl, Sultana’s sole focus may not have been building a business in the city. But, having lost her parents at a very young age and being the eldest of 4 young siblings, she decided to take charge of her own destiny.

And that she did. “It all started with me working at a photo studio. That’s where I learned some basic photography, photo printing, and album-making skills. I also learned Adobe Photoshop which I used to edit photos on. I must say it was quite unusual for a girl to be doing that, and I doing a job did not come without raised eyebrows from my own extended family and neighbors,” Sultana said.

She persevered because she knew she was on her own to take care of her young siblings; she was all they have. She set up a space using all the savings she had and after about a year, she came to FINCA Microfinance Bank (“FINCA Pakistan”) in order to expand her business. She took her first micro-loan of PKR 20,000 in 2010 (about $130). Albeit a small amount, the money gave her the courage and support she needed to work independently. “By the grace of God, my store started running well and I could easily manage the installments to FINCA Pakistan. This was when I realized I can, and must, do more. I would also like to appreciate the FINCA Pakistan Relationship Officer who handled my case. He was excellent and explained every question I had. In addition to processing the loan, he also advised utilizing the experience FINCA Impact Finance has in lending to a wide range of businesses”

The bank offers a wide variety of quick and easy loans. ‘Niswan Karza’ is one of FINCA Pakistan’s business loan offerings designed especially for females, where the terms and conditions of acquiring a loan are further eased to help businesswomen expand their businesses.

And a few more loans later, she also had a Photostat machine running on the premises. A while later, a beauty salon also found its place on Sultana’s premises and received great response. “It’s a mix of tiny businesses winning bread for me and my employees. I’ve gone through tough times myself, so I know how valuable these jobs are for my employees.”

This financial independence enabled Sultana to feed, educate, and care for her siblings.

Sultana’s small businesses also employs 5 people, for whom the job is their sole source of income. “People who didn’t trust me with a mere 1,000 rupees now trust me with hundreds of thousands as I also run major saving committees in the community. I have earned this trust and success with hard work, FINC Impact Finance’s support, and of course the blessings of Allah.”

Sultana is now a financially independent, empowered woman. At 34 years of age, she is a successful entrepreneur and a happily married woman with 3 beautiful kids and a loving and supporting husband. She has borrowed a total of PKR 500,000 ($3200) from FINCA Pakistan but looks to borrow more as she dreams of setting up a large-scale photo studio. “Bigger machines need bigger investment and I’m confident I’ll get the support from FINCA Impact Finance again.”

FINCA Impact Finance is encouraging women from all walks of life to join its family; from tailors expanding their stitching units to teachers growing their school businesses and tuition academies, to salons, stationery, and small shop owners. FINCA Impact Finance is always ensuring their customers are well taken care of. Even amidst the current coronavirus outbreak, FINCA Impact Finance has eased its loan repayment policies to support people in this crisis situation, realizing that businesses have been gravely affected and that the customer always comes first.

Andrée Simon on CGAP Blog: The Menace of COVID-19 for Microfinance